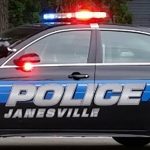 A woman has been charged with fourth-offense O-W-I after nearly hitting a police officer early Thursday morning in Janesville.  Tavia John’s legal troubles got worse when it was discovered she had a six-year-old child in the back seat of her car who wasn’t restrained.  John reportedly admitted she’d had five alcoholic drinks and her blood alcohol content was measured at more than twice the legal limit.  The officer narrowly escaped injury shortly after 2:15 A-M when John is accused of swinging wide while making a turn.