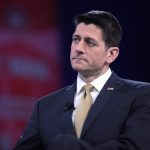 Ryan announced the launch of the American Idea Foundation on Monday. He moved more than $7 million from his congressional account into the nonprofit when he announced its formation earlier this year.

The foundation will be based in Ryan’s hometown of Janesville. Ryan moved his family from Janesville to Maryland earlier this year.

Ryan decided against seeking re-election last year, ending his 20-year career in the House. The Republican from Janesville has kept a mostly low profile since then. Since leaving Congress he joined the board of directors of Fox Corporation and the faculty of the University of Notre Dame.