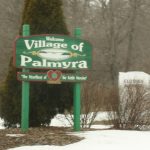 When emergency responders first arrived at a pond Tuesday afternoon, they found a woman and her dog in the icy waters of a pond.  Another dog had been able to get out.  Officer Paul Blunt and a Palmyra firefighter say they think they were able to get the victims out of the water in less than 30 seconds after they had fallen through the thin ice.  The woman says she paddled a canoe toward her dog after she dialed 9-1-1, but the canoe sank.  She tells authorities she thinks she was in the cold water for about 15-to-20 minutes, but the dog was in there for about 40 minutes.