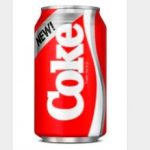 Why are people saying “no thanks” to the possibility of having the 1985 coke formula back for a limited time!?! Unless this is a major success, I believe this is only going to be an extremely limited thing. The tie in with the new season with “Stranger Things” is brilliant. The new season starts July 4th and it takes place in 1985, and this is when the whole thing started and the effects were still felt in 90’s.Since I was there, and lived this phenomena I would love to have a “New” coke. Not all the time, but one more…sure!

The popular cut and dry part of this story is…New Coke was an absolute failure and they brought back the original formula right away. Not quite, you see it was a new formula, and yes it tasted a lot like Pepsi, but I always thought the people that decide such things did this all on purpose. Pepsi was really coming after coke drinkers with one ad campaign after another. Coke needed to do something. I believe someone was thinking outside the box over at Coca-Cola, and decided to really shake things up. By the end of the summer that year Old coke came back as “Classic Coke” and eventually was just called Coca-Cola again. New Coke became Coke II and was still available in the late 90’s, if not longer, but I cannot confirm that because I would only see Coke II when I visited family in Chicago.

Regardless, this is nostalgia. Oh, by the way, I had a Crystal Pepsi last year, I can’t find those in the soda isle anymore, so I guess that’s done…for now. That was nostalgia too, you know, by bringing back Crystal Pepsi for a limited time. When you wonder why companies do things like this, keep this in mind, and as silly as it may sound…there is a reason why McDonald’s only brings back McRibs for a limited time. We may buy more of what we can’t have all the time.

Read more about the return of “New” coke from AP News – HERE.