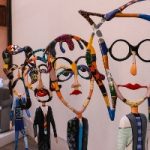 I was a huge Beatlefan, but I never really thought about spending large sums of money to own anything by them, let alone anything they may have had contact with either. Now if only someone would give me large sums of money for all the affordable stuff I did collect. It was mostly music like records, CDs and tapes. Oh yeah, then there are these…books, magazines, VHS tapes, laserdiscs, DVDs, boxsets…I could go on. -Eric

This article is from the Associated Press…
The very stage where The Beatles played their first concert is for sale. Julien’s Auctions will sell the stage from Lathom Hall in Liverpool, England. The Beatles played there for one time under the name The Silver Beats on May 14, 1960, before changing their name to The Silver Beetles and then The Beatles. They played on that stage several more times. The stage is estimated to sell for $10,000 to $20,000. Other items for sale include Paul McCartney’s handwritten lyrics to “Hey Jude,” a baseball signed by all four Beatles from their final U.S. concert in San Francisco’s Candlestick Park, and Ringo Starr’s Abbey Road ashtray. The auction will be April 10 in New York.