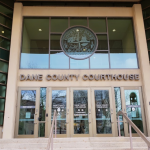 The two teenagers accused of killing a Madison doctor and her husband are blaming each other for the shootings.

The bodies of Doctor Beth Potter and her husband Robert Carre were found at the UW Arboretum in March.

An attorney for Larrue has asked the court to separate the trials, saying his client didn’t know what was going to happen.  Sanford’s defense says Larrue was the killer.