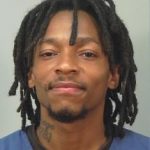 One owner of a business in downtown Madison says, “They have the right to protest, but they don’t have the right to damage.”  Several owners say 28-year-old Devonere Johnson, who was arrested Tuesday afternoon, had been harassing them and their customers for several days.  They say Johnson came into restaurants carrying a bat and a megaphone, demanding free food and drinks and threatening those who wouldn’t give it to his group.  The business owners didn’t want to be identified for fear of retaliation.  They say many interactions with protesters have been peaceful – but, with Johnson it was different.