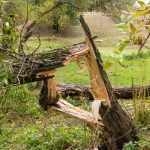 Officials in southern Wisconsin says it may take some time to determine how much damage Monday’s round of severe weather did.

The storms that ripped through yesterday afternoon were part of a derecho bringing 90 mile-an-hour winds to the state.

Tornado warnings were issued for areas near Janesville and Kenosha.  Officials have received many reports of storm damage, but no reports of any serious injuries.

More than 10 thousand customers lost power during the storms – and many are still without electrical service as of mid-day today (Friday),